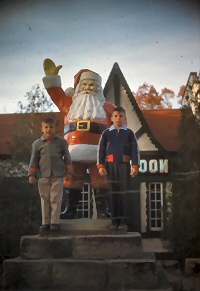 About 500 slides from the Brannon family (Robert Brannon, Sr., Elma, Robert, Keith) somewhere near Dale, Indiana. Perhaps Evansville. I'm guessing on both of these facts as there was little documentation accompanying this lot. There camping trailer with a "The Brannon's" tag on the back pictured in one slide. The photo is actually a close-up of the plate so that made me feel good about that guess. I had two clues on the location. Many of the slides were processed in Indiana and there is a close-up of a scouts banner that reads "Troop 200 - Dale, Indiana."

Robert (Rob) L. Brannon, Jr., of Evansville, Ind. Robert (Rob) L. Brannon, Jr., 67, passed away, Thursday, August 23, 2012, at home. He was born March 7, 1945, in New York City, to Robert Lionel and Elma (Millhouse) Brannon, Sr. He was a proud American with strength, honor and courage. Rob was an Eagle Scout where he learned many skills that would later in life benefit him as he served in the United States Navy as a Lieutenant JG. He was alumni of U of E and a strong supporter of the U of E basketball team...

Both Rob and younger brother Keith were in the scouts so there are loads of pictures of scouting jamborees and other scouting-related events. There are also Christmas, prom, graduation photos and a few amusement park photos from Santa Claus Land (Indiana), Boot Hill Museum (Dodge City, KS) & Horn's Cars of Yesterday (Sarasota, FL).

The bulk of the slides have reddened with age and will be priced accordingly.

Discounts from 10%-60% offered on purchase of entire lots. Click to see the discounted price for this lot or to make an offer. December 25, 1954 Christmas morning, 1954. Piled around the Christmas tree and nativity scene you can just make out an orange metal grader, box of Lincoln Logs, Chemcraft chemistry set, Treasure Island bank, something called Cabby! or Caggy! and a tin car. That might be a BB gun in the black case leaning against the wall.

December 25, 1954 One of the boys outside posing with a new BB gun or better. 1954 was too early for him to learn about shooting birds from Opie Taylor and his BB gun.

January 2, 1955 One slide from 1955 showing the kids and their friends on a porch pointing guns at the camera. Except for the oldest kid.

1955 Keith laying on the sidewalk with a 1950s camera. That's good enough to post as is. Put a blonde wig on the boy and the bar is raised significantly. 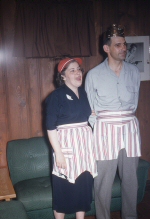 1955 1 red frame Kodachrome showing a woman with Easter Bunny ears in front of a totem pole. 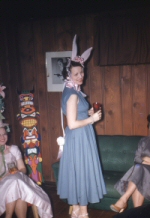 1955 Well, you keep digging through slides and questions are answered. Here we find Keith dressed as a girl, employing the blonde wig seen in the previous picture. One assumes Halloween related costuming. 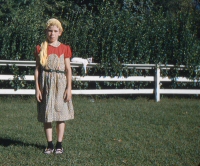 1955 Well, you keep digging through slides and more questions are answered. Here we find Robert dressed as a knight. Keith's female costume could be from the same period which could make this a school play. Or just Halloween.

click links for more pictures Robbie Dressed as a Knight
$12

1955 3 red border Kodachromes from a trip to Santa Claus Land in 1955. Rob and Keith are posed in front of the now famous waving Santa. Unfortunately there are while lines/cracks in the film. I have never seen this particular issue before on a slide. Usually the red frames hold up really well so it must have been processed or stored improperly. 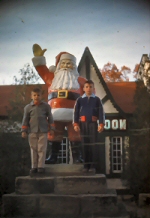 December 1955 3 red border Kodachromes showing wrapped presents and empy Christmas stockings. The slides have a small white cracks/lines in them.

1956 2 reddened Ektachromes from 1956 showing the kids riffing with an over-sized novelty Coca-Cola bottle.

April 1956 16 slides with in Kwik Klik frames. The glass in the frames is very dirty. If the slides were mine I would remove them from the frames before scanning. Some of the slides have reddened with age.

1956 One reddened Ektachrome showing a chess match between a young boy and older lad with a bolo tie. Based on the number of white pieces captured, the young boy appears to be doing quite well.

1956 One reddened Ektachrome showing a a young girl with a black eye or bee sting. She is posed defiantly in front of flowers. In a sailor dress.

1957 One reddened Ektachrome showing one of the boys posing in women's high heels while mother repots plants.

1959 11 slides from a few different formats. Most are reddened and most show Boy Scout activities.

1950s-1960s 16 picures from a trip to Florida. The highlight is 8 slides from a visit to Horn's Cars of Yesterday in Sarasota. About half of the 8 are photos of the family posed with their heads poking through the stand-up cartoon figures. The balance of the photos are beach and water scenes.

1950s-1960s 1 slide labeled "President Eisenhower Car Jamboree." Since this was a scouting family and the word jamboree was written on the slide we can conclude that this was taken at a scouting event. Eisenhower was president of the United States of America between 1953 and 1961 and he is referenced as "President" on the slide so we now see the possible date range for the photo. OK, everything is coming into focus except for Eisenhower, who is a vague human form in a car stuffed with humans. Priced accordingly.

1950s-1960s 20 vintage 35mm slides from a 1950s-1960s bus-chartered trip to the Boot Hill Museum in Dodge City, KS by Boy Scouts on the way to the National Jamboree at the California Ranch in California. There are also some pictures from a trip to the mountains. Colorado? Slides have reddened with age and as always I have corrected them using cheap software.

1950s-1960s 21 reddened slides from a vacation in Florida. There are a few shots from an indoor aquarium that features a woman swimming around in the tank with an air feed. Also includes pictures of the family camper with the famous "Brannons" tag on back by the natural gas tanks.

1950s-1960s 23 reddened slides from the 1960s. There are some shots of the zoo (Elephant, Aligator) and some pictures of one of the boys feeding a rabbit in the backyard. Another photo shows a flock of Horned Lark in the yard. 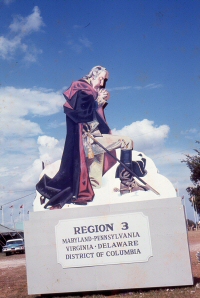 1950s-1960s 21 slides, mostly of a scouting event and pictures of boys posed on stools. Slides are very dirty and some have reddened with age. 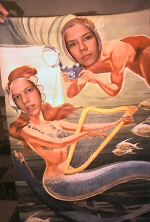 1950s-1960s 23 reddened slides from the 1950s or 1960s. There are some shots of the zoo (Elephant, Aligator) and some pictures of one of the boys feeding a rabbit in the backyard. Another photo shows a flock of Horned Lark in the yard.

1950s-1960s 15 age-reddened slides from the 1950s or 1960s. These are all pictures from a trip to the zoo. The zoo attractions include the Show Boat amphitheatre which on this day features a chimp riding a motorcycle.

1950s-1960s 19 reddened slides from a teen dance or some other social event held in the fifties or sixties. There are adults present so it may be a school event.

1950s-1960s 20 slides that were in small incomplete rolls or had become separated from their mates. These are mostly pictures of Robert and Keith. There are nice red frame Kodachromes and reddened Ektachromes.

1955-1957 15 slides that were in small incomplete rolls or had become separated from their mates. These are mostly from Robbie & Keith's Little League baseball games. There are nice red frame Kodachromes and reddened Ektachromes.

1950s-1960s A large lot of 93 slides that were in small incomplete rolls or had become separated from their mates. There are not very many, if any, pictures of the boys. There are a lot of nice red border Kodachromes and a lot of reddened Ektachromes.

1950s-1960s 18 scouting slides that were in small incomplete rolls or had just become separated from their mates. The slides have reddened with age and need a good cleaning.

1960s 19 reddened slides from a trip to Meramec Caverns in Stanton Missouri and some prom pictures.

April 1966 Two things going on in this lot of 18 slides from 1966. There are a few slides of a outdoor gather-around-a-fire event and an indoor Adult Easter party. The majority of the Easter party pictures are of the adults hanging out in the livingroom in formal clothing. There is one shot of the help - a black woman in a maid costume in the kitchen. I'm not picking on the family. It was 1966 so I know that she wasn't a slave and that she was being paid for her service. She may have been ecstatic to have the job. On other occasions they may have employed a white or Hispanic housekeeper and supplied them with similar uniforms.

November 1966 An unlabeled box of slides from November 1966. There are a few graduation pictures and some photos of a prom couple. The graduate shot looks like Robert and the prom photos appear to be Keith with a date.

End of series. Go back to the menu.

Copyright © 1996 - 2021 GoGoMag.com. All Rights Reserved. Reproduction in whole or in part in any form or medium without express written permission is prohibited. Privacy Policy